The Oldest Black-Owned Businesses in the U.S. 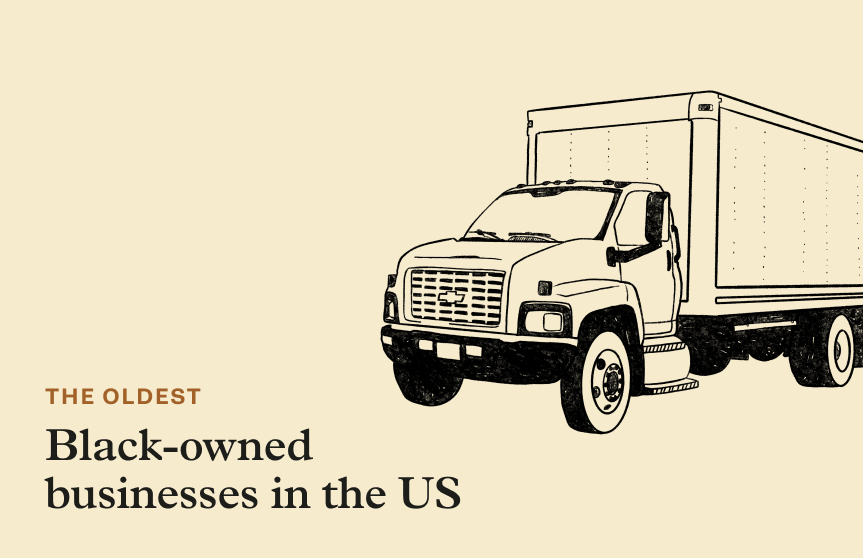 Black-owned businesses are pillars of the community and a testament to a fundamental American ideology: that anyone can succeed, no matter the adversities they face.

In honor of Juneteenth, we’re looking into some of the oldest Black-owned small businesses in the country. Juneteenth (June 19) celebrates the emancipation of enslaved peoples in the United States. The holiday was first celebrated in Texas in 1865, and as you’ll soon see, some of the oldest Black-owned businesses in the country sprang up just a few years later.

We were honored to speak to Brian Brooks, the co-owner of the oldest Black-owned business in the country, E.E. Ward Moving and Storage Company.

Q: Tell us about the history of the company.

Brian: E.E. Ward Moving and Storage Company is based in Ohio, and was founded in 1881 by John T. Ward. Between 1842 and 1858, Ward helped conduct the Underground Railroad and not only transported escaped slaves, but also provided them shelter underneath his home. His business started with only two horses and a wagon, but over 140 years, E.E. Ward has become one of the oldest and most-trusted moving companies in the country.

Q: What does being a small business owner mean to you?

Brian: It means responsibility and accountability, because small businesses are what employ many people in America. It also means facing and overcoming unique challenges.

Q: What kinds of challenges do you face?

Brian: The challenges we experience as small business owners are totally different than what others might consider a challenge. We’ve been to twenty banks and have been told “no.” We’ve been to 50 corporations and have been told “no.” We’ve been around for 141 years, and when you break down those years and really examine what we’ve survived through—two world wars, the Great Depression, stock market crashes, race riots, the Civil Rights Movement and now the pandemic—it just proves that there’s nothing like a small business.

Q: Running a small business is hard! Why do you keep doing it?

7 Other Black-owned Businesses that are (Almost) a Century Old

Here’s a look at seven other Black-owned businesses that are (almost) over a century old!

Jones Bar-B-Q Diner is widely considered the oldest Black-owned restaurant in the country, with roots that date back to 1910. The story goes that the original owners marinated smoked meat in a bathtub before opening an eatery in a single-family home in 1964. That location is still open today! The diner is the first restaurant in Arkansas to win a James Beard Award.

The Philadelphia Tribune was founded by Christopher J. Perry in 1884 when he was just 28 years old. It was a weekly one-page paper and by 1887, it averaged 3,225 weekly copies. The Philadelphia Tribune is the oldest Black-owned newspaper still in operation today. Perry poured his heart and soul into the periodical, working virtually every job from reporter to advertorial rep. Today, the Tribune has a circulation of nearly 220,000 and a readership of 600,000.

Founded by former-slave-turned-entrepreneur John C. Merrick in 1898, NC Mutual is the oldest Black-owned life insurance company in the country. After securing a loan from wealthy tobacco industrialist Washington Duke, Merrick founded the North Carolina Mutual and Provident Association: one of the core businesses of Durham’s Black Wall Street.

The Afro was founded in 1892 by John Henry Murphy Sr., a freed slave who saw an opportunity to inspire and educate his fellow emancipated citizens. The periodical was actually a conglomerate: Murphy merged several independent church publications into a single paper. Today, the paper stands as the oldest family-owned Black newspaper in the country.

Founded in 1912 by Jackson Patillo, Patillo’s Bar-B-Q is famous for its Cajun-Creole-inspired barbecue. The restaurant has moved around for more than a century, but today it’s located in Beaumont, TX. A family-run business, it’s owned and operated by Jackson’s great-grandson, Robert Patillo, who serves up all kinds of original, delicious entrées.

From humble beginnings as a simple two-page church bulletin, the Indianapolis Recorder rose to become a powerhouse of reporting on national and global events. Over the last century, the paper’s circulation rate has grown to 100,000. Still published today, it seeks to continue to support and empower its primarily African-American readership.

The rise of Black-owned small businesses in America

The number of  new Black-owned businesses has steadily grown over the years. As of early 2022, roughly 1.2 million African Americans were self-employed.

Small Black-owned businesses are a triumph worth celebrating

5 Ways to Market Your Business on a Shoestring Budget

DBA Meaning: What is DBA and Why it Matters to Your Small Business

What is Financial Reporting and Why is it Important?