12 Surprising Entrepreneur Statistics to Know in 2023 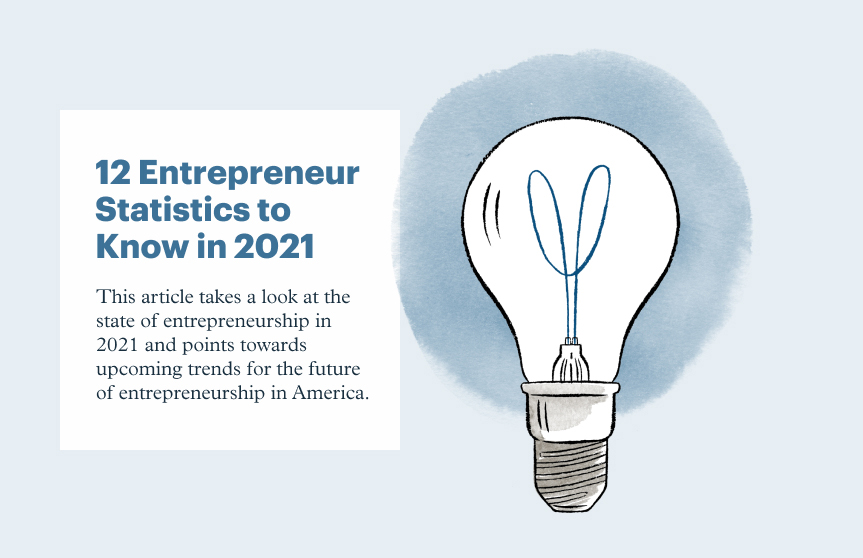 Over the last year the way we work has changed at a fundamental level. The pandemic has reshaped how people approach their jobs while also pushing many folks to venture out on their own, sometimes because of a newly sparked interest in entrepreneurship and other times because of necessity.  This article takes a look at essential entrepreneur statistics in 2023, painting a picture of the good and bad, and pointing towards upcoming trends for the future of entrepreneurship in America.

1. How many entrepreneurs are there worldwide?

There are approximately 582 million entrepreneurs across the globe.

With the rise of entrepreneurs like Tim Ferris and Chris Sacca the idea of the self-made businessman has captured the minds of folks across popular culture. The celebrity-esque status of many entrepreneurs worldwide has sparked a rise in folks starting their own small businesses, side-hustles, and  start-ups.

According to this article in The Hill, there are approximately 582 million entrepreneurs across the globe. The number is taken from a survey by The Global Entrepreneurship Monitor that surveyed 65 different economies worldwide.

2. How many entrepreneurs are there in America?

There are over 800,000 entrepreneurs in America.

The United States is known as the land of opportunity. More than any other country on earth America prides itself on fostering the conditions necessary for huge companies to grow, allowing people to make their dreams into a reality, and make boatloads of money in the process. That’s why it isn’t surprising that there are over 800,000 entrepreneurs in America according to Statista entrepreneur statistics. The number is up over 100k since 2005 and is trending upwards. In 2019, the rate of new entrepreneurs in the U.S. was 0.31 percent, or 310 individuals per 100,000 adults

3. How many entrepreneurs are successful at running their business?

30% of businesses remain in operation by their tenth year. 20% go under by their first year and 30% go under in their second year.

There are new businesses across America starting every day, but just because you’ve made the leap to start your own business doesn’t mean that you’re going to be successful at it.

Twenty percent of small businesses fail within their first year. That number increases progressively as time goes on. Thirty percent end up failing in their second year. By the tenth year only 3/10 businesses that started up remain in operation.

Want to keep your business going? Having a better banking account can definitely help.

4. How do entrepreneurs fund their business?

If you’re starting a new small business, you’re going to need some capital. There are many different ways you can get money for your new venture. Maybe that’s putting in the cash yourself. Maybe it’s asking friends and family to pitch in or doing a pre-order for one of your products to cover upcoming production costs.

Let’s take a look at funding for entrepreneurs.

5. Which businesses have the highest success rate?

When starting up your own business, you want to put yourself in the position to have the highest rate of success. While it’s always fun to follow your dreams — and you’re able to work the best when your heart is in what you’re doing — there are some businesses that are prone to making more money than others.

The businesses with the highest pound for pound success rates are finance, insurance, and real estate — 58 percent of these businesses were still operating after four years.

6. How much does the average entrepreneur make?

According to entrepreneur statistics of the American Census Bureau, the average entrepreneur makes around $61,000 per year.

That’s about 11,000 more than the average American salary. All of this points to the fact that while it can seem like a big risk, the payoffs might actually put you ahead if you’re able to do things responsibly.

7. What percentage of businesses are profitable?

Just 40% of small businesses are profitable.

If you’re starting a small business chances are it is because — among other reasons — you are trying to make some money. But how many entrepreneurs creating small businesses actually get paid? When looking at the numbers a little under half —

40 percent of small businesses are actually profitable. About 30 percent break even and another 30 percent are continually losing money. If you’re looking for a business banking account to help cut down the time you spend dealing with your financial life, you should sign up for NorthOne. That way you’ve got more time to make sure your small business Is turning a profit.

8. How many entrepreneurs are self-made?

While there aren’t clear statistics on the number of self-made entrepreneurs, 80% of American billionaires are self-made.

You may think that to start your small business you have to have wealthy connections, people who own yachts and have opinions about jet lag. But that’s not entirely true!

Research done by Wealth-X shows that there were 585 billionaires in the US in 2016. In the last five years that number has only grown. While 20% of those billionaires achieved their status through inheritance, the majority were self-made.

Those big numbers can motivate big dreams, and point towards folks earning massive incomes through following through on powerful ideas.

9. Why do most entrepreneurs start their own businesses?

More than 50% of small business owners start their small businesses because they’re inspired to create something from the ground up.

There are plenty of good reasons to venture out on your own and start your small business. But for the majority of entrepreneurs their reasoning is simple. They want to be their own boss. Stats from

Cox Business showed that this is the case for  more than half of small business owners. Research also showed that many were inspired by the idea of creating something from the ground up. Surprisingly money was not a popular motivating factor for many small business owners: Just 8% of respondents said that cash was their main motivation for beginning.

10. How many people do small businesses employ?

If you’re starting up your small business, you may dream of having huge offices with hundreds of employees doing the bidding of yourself and your company. You may have visions of neon signs with the word hustle on the wall and potted plants littered around an open concept loft. The reality can be a bit different.

62% of small businesses have no employees at all. It’s a one person shop running the show. But just because you haven’t got a slew of underlings to boss around doesn’t mean that you can’t crush it. Being the only employee also means that you’re taking in all of the profits. And that’s a good thing!

11. What percentage of entrepreneurs are college educated?

44% of entrepreneurs have a college degree.

A solid education can give you skills and connections that may definitely help you make strides with your business ventures. But a college degree isn’t a necessity for getting ahead or starting your own entrepreneurship adventures.

In fact less than half of small business owners have a college degree at all. Percentage wise just 44% of entrepreneurs have a college degree. While it can certainly be useful to have some higher education when starting up your company, it isn’t something you need in order to be successful. Most people don’t have that background at all.

12. Why do most entrepreneurs fail?

42% of businesses fail due to lack of demand for their product or service.

According to the entrepreneur statistics research done by CBInsights, 42% of businesses fail for the simple reason that there was no real market needed for what they were trying to sell. The second most common reason is the lack of funds. That impacts 29% of businesses that fail.

Before starting your business it is important to make sure that there are actually going to be customers for whatever it is you’re trying to sell. That can seem basic but it is an important step. Don’t get too far ahead of yourself.

2. Statista: Businesses in the U.S.

How Inflation Impacts Businesses in the US

How to Make Your Small Business More Successful in 7 Steps

14 Best Apps for Hairstylists in 2023: Scheduling and Marketing

Exempt vs Non-Exempt Employees: The 3 Differences