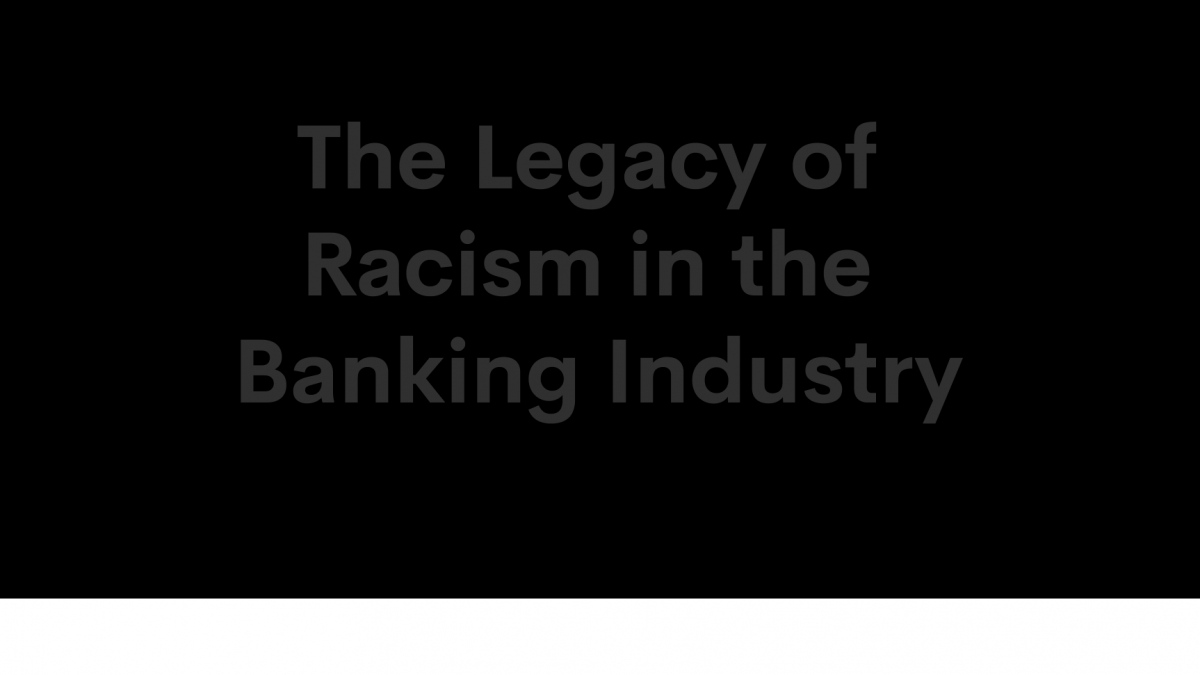 *We are committed to deepening our understanding about the systemic anti-Black racism in the banking industry in which we work. However, instead of simply reflecting on history, we are compelled to hold up a mirror to our industry today. The conclusion is clear: There is much work left to be done. Sharing our learnings is but the first of many steps to building a better bank and banking system for all entrepreneurs.

Historical discrimination in the financial industry, especially in the Black Community in America has been well documented. It’s important to us, as a company and as individuals, to publicly recognize this history so we can build a bank that helps reverse the industry’s legacy of racism.

The Failure of the Freedmen’s Bank

The Freedmen’s Bank was set up following emancipation in 1865. The idea was to help newly freed Black American’s start to develop their own wealth. Despite the fact that the bank didn’t offer loans, it grew strong with tens of thousands of depositors trusting it with their assets.

By 1874, fraud and mismanagement by senior leaders and the board of directors at Freedmen’s had weakened the bank. One board member, White businessman Henry D Cook, used money from the Freedmen’s bank to invest in his own quarry operations. The quarry eventually went bankrupt and the bank was devastated.

By 1874 Freedmen’s Bank had closed. 60,000 Black Americans lost $3 million in savings. Given that full-time employment and fair pay were rarely accessible for ex-slaves, it was no surprise that much of this wealth was built through the establishment of Black businesses. When the Freedmen’s bank failed, many of these entrepreneurs and their families were financially ruined.

The failure of the Freedmen’s bank was the beginning of a cultural legacy of mistrust by the Black community towards banking institutions. More importantly, it perpetuated a systemic wealth gap that continues to this day where the average household wealth for a White American family is $171,000 and only $17,000 for a Black American family.

A History of Redlining

Redlining is how the federal and some local governments, as well as many private companies, created systematic inequality for black communities across the US.

Starting in the 1930s, many lenders drew red lines on maps to outline neighborhoods they would not loan to. Black inner-city neighborhoods were the most likely to be redlined. The services these residents were denied included mortgages, student loans, credit cards, and insurance.

In 1968 the Fair Housing Act was passed making redlining illegal but its legacy continues to affect minority communities to this day. A study by the National Community Reinvestment Coalition in 2018 found that 80 years later, 3 out of 4 neighborhoods redlined in the 1930s still struggle economically.

While it’s tempting to believe that redlining isn’t something that’s impacting the US today, that’s unfortunately not the case. The impact of redlining can still very much be felt in many major cities across the country that are still heavily segregated by neighborhood and the availability of services depends on if you’re in a White or Black area.

The legacy of redlining is one of the main contributors to the racial wealth gap which can make it harder for black entrepreneurs to get their businesses off the ground and black families to achieve their financial goals.

In 2019, researchers for the National Bureau of Economic Research found that Black mortgage borrowers were charged higher interest rates than White borrowers and were denied mortgages that would have been approved for White applicants.

Many Black customers are regularly viewed with suspicion just for entering a bank. They can be refused service and questioned over basic transactions. There are too many examples of this, but we gathered just a few:

In July 2018, Barbara Carroll, an elderly Black woman, walked into a bank to cash a check. Despite handing over legitimate identification, she was accused of forgery and the police were called.

In August of the same year, Jean Romane Ellie went to a bank to withdraw money for rent. The police were called and Ellie was put in handcuffs, detained and accused of committing a felony.

In September 2019, Doctor Anthony Onyegbula walked into a bank to open an account. He ended up under investigation after a bank teller deemed him ‘suspicious’.

Bank’s customers are not the only victims of the legacy of racism that exists within the industry. In September of 2018,  JPMorgan Chase & Co agreed to pay six current and former employees $19.5 million in a settlement for racial discrimination. The bank was accused of practicing “uniform and national in scope” discrimination against African-American financial advisors. The bank was accused of isolating their own employees from White colleagues and cutting them off from career opportunities.

So where do we go from here?

Entrepreneurship is a powerful tool that can be used by members of minority communities to gain economic freedom. But the inability to access the financial tools and resources needed to start and grow a business often stands in the way of their success. This lack of access to resources is not just a symptom of the racial wealth gap in America, it is also the cause.

It also strikes at the heart of why NorthOne was built. We started NorthOne to empower anyone who wants economic freedom, to improve their circumstances in life, and the comfort and wellbeing of their family through entrepreneurship.

We see online banking as an opportunity to democratize access to the financial system by making banking easier and more accessible for everyone. We want to empower small business owners by letting them take care of business and focus on what really matters.

There is so much work to do to make the system better for all people, and especially members of the Black community and other People of Color. Learning about our industry’s past and committing to improving its future is our commitment to our present and future customers.

Overdraft and NSF fees can hurt small businesses. So we don’t charge them.

Building NorthOne: What Is Serverless Architecture and How Do We Use It