What is Net Working Capital? Formula and Examples 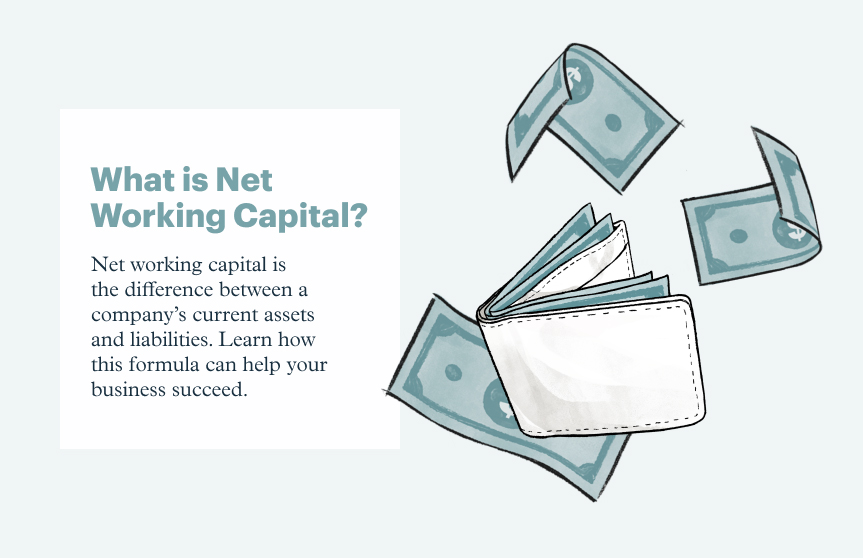 Net working capital is the ratio between current assets and current liabilities. We explain what this means and how it can affect your business.

When all else is equal, a business will prefer to own more and owe less. Keeping track of how these numbers change will help business owners determine whether their business is moving in a positive or negative direction.

One of the most common business metrics is net working capital (NWC). This formula, simply, represents the ratio between a business’s current assets and its current liabilities. In other words, it represents the amount of capital that a business currently has to work with. A company could have a lot of wealth, in theory, but if this wealth is in highly illiquid assets (non-current assets), then making any major changes could be extremely difficult.

Both large and small businesses with high levels of working capital, on the other hand, will find themselves capable of making changes much more quickly. This metric is used by business owners, lenders, and even regulatory agencies. Overall, net working capital is often cited as one of the “purest” financial metrics for evaluating a company’s short-term financial well-being.

Below, we will discuss some of the most important things to know about net working capital, including how to calculate it and when to use it. By taking the time to understand how and why this metric is so commonly used, your business can improve its financial health and position itself for success.

What is Net Working Capital?

As indicated, net working capital simply represents the ratio between a business’s current assets and its current liabilities. When a company’s NWC is greater than one, this means the company has a positive NWC. On the other hand, when the ratio is less than one, this represents a “negative” NWC, something that is usually problematic.

One of the most important distinctions to make when calculating this metric is the difference between current (short-term) and long-term assets and liabilities. Liabilities and assets can all be located on a company’s balance sheet. Current assets include assets that will likely be used in the near-term (usually one year), including “cash, accounts receivable, inventory, and supplies.” Long-term assets, such as property, plants, and equipment, are not accounted for when calculating NWC.

When current assets are greater than current liabilities—meaning that the NWC is above one—this indicates that the company can generally manage its near-term financial obligations. It also might want to use some of its “excess” current assets, like cash, to invest in profit-generating components of the business. If a company’s NWC is less than one (“negative”), on the other hand, this suggests there might be a capital shortage or liquidity issues that will need to soon be addressed.

The formula for net working capital is simple:

The real challenge faced when calculating net working capital is determining which assets and liabilities are classified as current, instead of long-term. Incorrectly classifying long-term assets (like property) as current, for example, can cause a company’s NWC to be artificially positive and will suggest the company is more liquid than it actually is.

To calculate net working capital, you must begin by looking at the company’s balance sheet. Take the following (simplified) example:

To calculate NWC, all we have to do is divide current assets by current liabilities.

The net working capital in the example above is 1.67, which represents a “positive” NWC. In most cases, this would indicate it is in a liquid, financially stable position.

How to Improve Your Net Working Capital

To improve the NWC ratio, your business must either increase its current assets or decrease its current liabilities. Selling inventory and turning that inventory into revenue (with a positive profit margin) will cause your NWC to increase. Converting long-term assets into current assets (such as selling a piece of equipment in exchange for cash) will also cause the NWC to increase.

Conversely, converting your short-term liabilities into long-term liabilities—such as restructuring debt or tax obligations—will also cause the working capital ratio to increase (even if this doesn’t truly change your financial position. Paying off outstanding liabilities can also have a positive impact, though it will depend on what you are using to make these payments.

As is the case with all financial ratios, there are both pros and cons of using net working capital (NWC):

Net working capital uses a simple formula that makes it easy to determine whether a company is capable of meeting it’s short-term financial obligations. When all else is equal, a company would prefer to have more assets than liabilities, so improvements to NWC usually indicate that the company is moving in a financially stable, liquid direction. In other words, focusing on improving NWC will help improve a company’s overall financial health.

Net working capital, for some, is too simple and doesn’t always illustrate the true financial status of the company. For example, if a company sells its long-term assets (such as real estate) in exchange for cash, the NWC will increase, but this does not necessarily indicate that the company made a financially or operationally wise decision.

Still, along with an examination of the full balance sheet and the use of other financial metrics, looking at net working capital can be very useful.

Is There Value Hidden In Your Financial Data?

How to Make Sure Your Business Stays Financially Healthy

How to Send an Invoice by Email